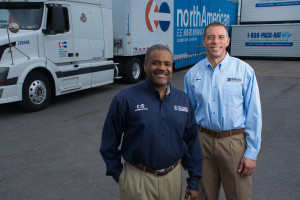 E.E. Ward Moving & Storage co-owners Brian Brooks and Otto Beatty III were recently honored at the Columbus’ Black Leaders and Legends Awards.  E.E. Ward Moving & Storage Co. was established in 1881 and is considered by the U.S. Chamber of Commerce to be the oldest minority-owned company in the United States.  Brooks and Beatty purchased the company from the Ward family in 2001, and in the course of their 12-year ownership, have transformed the company from a local mover to a nationally networked agent for North American Van Lines.  The company was also recognized this year by North American Van Lines with a first place award for its consumer growth.

Sunny Martin, Managing Partner with GrapeVineColumbus.com, hosted the event to commemorate the year 2013, a historical milestone in the African-American community – the 150th anniversity of the Emancipation Proclamation.