Every person has a unique routine each morning to get them motivated to begin the new day. Some freshen up with a shower, cook some breakfast, and read the morning news. Others find that the best way to start their day is to go for a morning jog or walk as the sun rises. But in this busy world a common factor in many Americans daily is that of drinking coffee. Whether you take it hot, iced, black, with cream or sugar Tim Horton’s is hoping to serve you the freshest brew.

As E.E. Ward drivers, movers, and warehouse workers are starting their day a fresh cup of coffee can be a great way to kick-start the day. So quite simply, it seems to be a match made in mocha heaven.  Well at least so thought E.E. Ward co-owners, Otto Beatty III and Brian Brooks, and Tim Horton’s owner Robert E. Lee. Robert who owns the location on 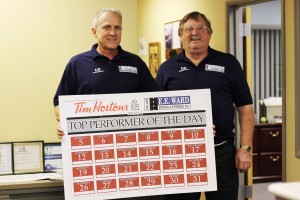 Livingston Avenue and a few other locations in Columbus. Due to the relative proximity of the two locations, and incentive program was inspired for E.E. Ward drivers, movers and warehouse workers. For the month of August, there will be a “Top Performer” of the day and he or she will receive a gift card compliment of Tim Horton’s. Staff at E.E. Ward will vote each day to determine the winner. The event was kicked off this past Monday with a catered Tim Horton’s breakfast for drivers, movers, and warehouse workers. Since then, driver Terry Wood and warehouse worker Marquan Barnes took home the title and prize for their exemplary work efforts.

E.E. Ward is proud to stand up and offer this program for its workers as a way of promoting them and recognizing their hard work. Further, collaborating with another business is an objective striven for in which to keep the central Ohio area thriving. Regardless if it’s a cup of coffee or soup in the morning, you can rest easy at night know that E.E. Ward is always providing safety and security when moving and storing your personal possessions.