Is Food in the Workplace Beneficial? 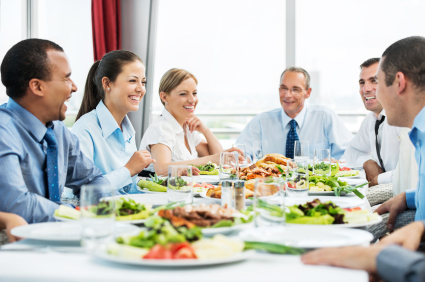 Food in the workplace has become a staple for great companies in the 21st century, or at least that’s what everyone says, because people see those cliché magazines with cover photos of something like ‘ten coworkers laughing over salad’. So they think to themselves ‘being at work is fun when food is involved’. And when it comes down to it, that’s really what every company wants to provide for their workers: a great environment where they can feel comfortable while also being productive.

With options of donuts, great coffee, or just pastries that are lying around, it’s easy to believe free food plays a major factor in the overall performance of a company. So it’s almost shocking to find that research shows that food really doesn’t affect anything. BUT, the catch is that is only true if a company lacks a healthy workplace prior to bringing in goodies because then the goodies may then feel like a bribe to people.

Donuts in the office Tuesday at EE Ward!

Food is definitely a perk most workers could agree. Even as many as 30% of survey respondents say food contributes to their overall happiness in a work environment; however, happy employees are not necessarily engaged employees. Only people who truly enjoy what they do will have higher productivity. Food itself is not increasing productivity as in comparison to unifying a group of people at work.

So before you set out the cookies, maybe set them out at a team meeting or make the pizza you were going to order a company outing instead. It is about the team culture food creates rather than the instantaneous productivity boost it brings when you simply set it out. Use food as something to bond over in order to create a stronger company environment, in turn, collecting workers that love what they do. Once you have workers that enjoy what they do, a simple treat like a brownie at the beginning of the day that is set out for all can boost one’s mood that much more. You see, food is not to be used to fix the productivity of a broken company’s culture but rather to increase the productivity of a strong company with team culture.